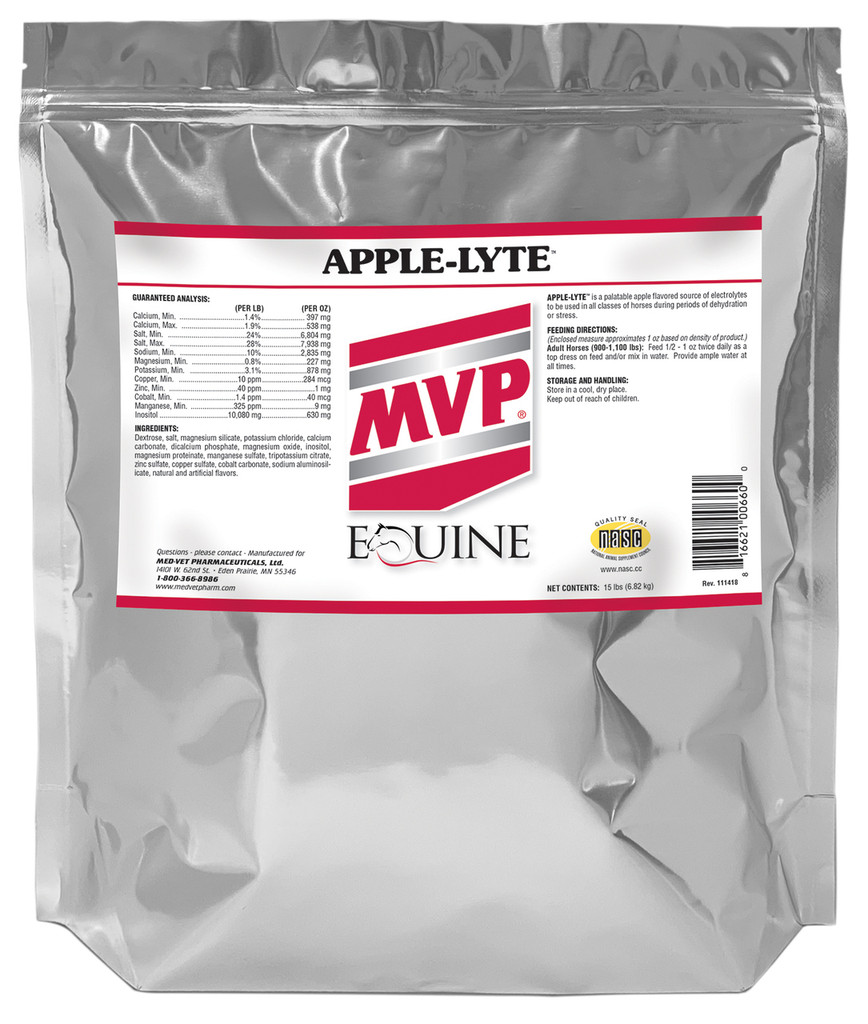 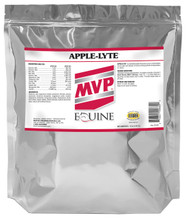 "Living in the Northwest, we have to be concerned with keeping our many horses hydrated in both cool and warm weather. Apple-Lyte has been an economical and effective product that does just that. Even our picky eaters lick their feed bowls clean when we give them Apple-Lyte! Like the 15lb size, too!"

Apple-Lyte™ is a highly palatable apple flavored source of electrolytes and trace minerals indicated to be used during periods of stress and/or dehydration, as a nutritional/ electrolyte supplement.  Apple Flavored!

Directions for use: Horses: Provide 1 oz daily with feed and/or mix in water. Provide ample water at all times.

(Enclosed measure approximates 1 oz based on density of product.)

Sodium is critical for normal nerve and muscle function, as well as transport of many substances (such as glucose) across cell membranes. The two elements (sodium and chloride) are responsible for the regulation of all the horse’s body fluids, as well as the conduction of electrical impulses in nerves and muscles, and they are the most important of the minerals known as electrolytes (minerals which are lost in the sweat and urine during exercise stress). There is very little sodium in forages and grains, so it must be supplied separately.

Salt (also known as sodium chloride or NaCl) plays an important role in normal nerve and muscle function and can help encourage your horse to drink, making it critical for his well-being. Adult horses in no work need at least one ounce of salt per day, and that need goes up with exercise and warm weather. If your horse’s daily requirements for salt aren’t met, he may not be in optimal health nor able to perform at his best.

Magnesium is a vital macromineral, and it is becoming increasingly recommended by veterinarians for various treatments in the horse. Within the muscle calcium and magnesium work antagonistically, calcium causing muscle contraction and magnesium inducing relaxation.

Calcium is a micromineral found in highest amounts in bone and teeth. However, it also has important roles in muscle contraction, cell membranes, blood clotting, enzymes regulation, and hormone release. Absorption of calcium from the small intestine is controlled by vitamin D but can be reduced if there is too much phosphorus in the diet. Ideally, horses should receive slightly more calcium than phosphorus – a ratio between 1:1 and 2:1 is probably best. Pregnant and lactating mares, growing horses, and exercising horses may need more dietary calcium than an adult horse at rest.

Potassium is a macromineral commonly referred to as an electrolyte because it helps maintain the body's acid/base balance and hydration status. One of potassium’s major roles is to keep the sensitivity of nerves and muscles at normal levels, not under or over reactive to impulses telling them to contract. This includes both skeletal and heart muscles. It is one of the most important minerals throughout the body. Fortunately, most horses receive all the Potassium they need from their forage. The amount of Potassium in the diet of HYPP

Zinc is a micromineral involved in over 100 enzyme systems ranging from connective tissue formation and antioxidant protection to carbohydrate metabolism and immune system function. It is most recognized for its role in healthy skin and hooves and supplementation should be considered because amounts in normal feedstuffs may not meet requirements and toxicity has not been reported.

Manganese is a micromineral essential for bone formation, growth and reproduction. It is also essential in carbohydrate and fat metabolism. Supplementation should be considered because not all diets provide the same levels of manganese. It is among the least toxic of the trace minerals, and it plays an important role in young growing horses as well as active performance horses.

Copper is a micromineral required for production of normal connective tissues including tendons, ligaments, cartilage and bone. As a component of many enzyme systems, it is also involved in making iron available to the body for blood, in producing skin and coat pigments, in proper nerve signaling and in repairing antioxidants. Low Copper levels in mares and foals have been implicated in developmental orthopedic disease (DOD) including osteochondrosis (OCD).

Cobalt is a micromineral used by intestinal microorganisms to produce vitamin B12, which works with iron and copper to form healthy red blood cells. It is of minor interest because this is its only role in the body, no known cases of deficiency or toxicity have been reported, and horses take in all the cobalt they need from their normal diets.

Can I put Apple-Lyte in my horses water?

MVP:  Yes, however when giving electrolytes in water, be sure to always provide an additional water source without electrolytes. Providng water with electrolytes may cause issues with horses that are not used to the taste, as it may take time to become accustomed to it. Offering water free of electrolytes added will prevent dehydration during transition period. Apple-Lyte may also be given in your horse's feed.

How do I test my horse For dehydration?

Is Apple-Lyte beneficial for short term use as well? I know it says for daily use but can I just use it during extensive long weekend competitions or during a short term heat wave? Should I use more if so?

MVP: Apple-Lyte™ may certainly be used short term. The recommended serving size would remain the same even if fed short term. For intensive weekend competitions, you might also consider Electro-Cell II Paste.

Living in the Northwest, we have to be concerned with keeping our many horses hydrated in both cool and warm weather. Apple-Lyte has been an economical and effective product that does just that. Even our picky eaters lick their feed bowls clean when we give them Apple-Lyte! Like the 15lb size, too!

Wonderful product! Sometimes we have fussy water drinkers and will completely avoid drinking while at a show. But with Apple-Lyte our horse stay hydrated and cannot get a enough of it! Tastes good and is affordable.

I will never be without a bucket of Apple-Lyte in my barn, summer sneaks up on us here in the North so I like to be prepared. My horses love the Apple-Lyte and I love knowing they are being protected from dehydration.

Create an account with us and you'll be able to:

Fill in your email below to request a new password. An email will be sent to the address below containing a link to verify your email address.